In Homology and Cohomology, we showed how to study the topology of spaces using homology and cohomology groups, which are obtained via the construction of chain complexes out of abelian groups of subspaces of the topological space. However, we have not elaborated how this is achieved. In this post we introduce the notion of a simplex, which gives us a method of “triangulating” the space so that we can have construct the chains that make up our chain complex.

-simplex can be thought of as the

-dimensional analogue of a triangle. More technically, it is the smallest convex set in some Euclidean space

, called its vertices, such that the “difference vectors” defined by

are linearly independent. We will use the notation

to denote a simplex. We will keep track of the ordering of the vertices of the simplex, and we will always make use of the convention that the subscripts indexing the vertices are to be written in increasing order.

To make things more concrete, we discuss one of the most basic examples of an

-simplex. It is defined to be the subset of

-simplex is a point (actually the point

on the real line

-simplex is a line segment connecting the points

-dimensional Euclidean space, and the standard 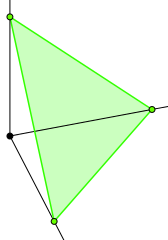 . This is of course a triangle. To this

-simplex there are three related

. They can be thought of as the “edges” of the

, and together they form the boundary of the

We want to use the concept of simplices in order to construct chains, which in turn form chain complexes, so that we can make use of the techniques of homology and cohomology. Crucial to the notion of chains is the abelian group structure, so that we can “add” and “subtract”

-chains, for a given

means that the vertex

is to be omitted. Therefore, for the

Simplices, with the boundary operators, can therefore be used to form chain complexes. The chains in this chain complex consist of “linear combinations” of simplices. We can then apply the notions of cycles and boundaries, and the principle that a space that is the boundary of another space has itself no boundary (but not all spaces that have no boundaries are the boundaries of other spaces – this is what the homology groups express), to study topology.

Of course, not all spaces look like simplices. But for many spaces, we can always map simplices to them via a homoeomorphism. Intuitively, this corresponds to “triangulating” the space. For example, we may map the boundary of a tetrahedron (made up of four triangles –

-simplices – with certain edges and vertices in common) homeomorphically onto the sphere. What this means is that we can essentially then take the techniques that we have developed for the tetrahedron and apply them to the sphere.

Similarly, we can take a square with a diagonal (made up of two

-simplices, again with certain edges and vertices in common), identify opposite edges of the boundary, and map it homeomorphically to the torus. This allows us to calculate the homology groups of the torus.

Image by User Tosha of Wikipedia

A Concise Course in Algebraic Topology by J. P. May

One thought on “Simplices”