In Homotopy Theory we defined the fundamental group of a topological space as the group of equivalence classes of “loops” on the space. In this post, we discuss the fundamental group from another point of view, this time making use of the concept of covering spaces. In doing so, we will uncover some interesting analogies with the theory of Galois groups (see Galois Groups). Galois groups are usually associated with number theory, and not usually thought of as being related to algebraic topology, therefore one might find these analogies to be quite surprising and unexpected.

We will start with an example, which we are already somewhat familiar with, the circle. For simplicity, we set the circle to have a circumference equal to

. We also consider the real line, which we will think of as being “wrapped” over the circle, like a spring. We may think of this “spring” as casting a “shadow”, which is the circle. See also the following image by user Yonatan of Wikipedia:

Looking at the diagram, we see that we can map the line to the circle by a kind of “projection”. As we move around the line, we “project” to different points on the circle. However, if we move by any distance equal to an integer multiple of the circumference of the circle (which as we said above we have set equal to

), we come back to the same point if we project to the circle. At this point we recall that the fundamental group of the circle is the group of integers under addition. We can think of an element of this group (an ordinary integer) as giving the “winding number” of a loop on the circle.

is exactly the fundamental group of

More generally, a covering space for a topological space

is another topological space

with a continuous surjective map

such that the “inverse image” of a small neighborhood in

is a disjoint union of small neighborhoods of

. In the diagram above, the inverse image of the small neighborhood of

is the disjoint union of the small neighborhoods

There are many possible covering spaces for a topological space. Here is another example for the circle (courtesy of user Pappus of Wikipedia): 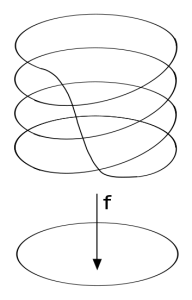 We can think of this as a circle “covering” another circle. However, the first example above, the line covering the circle, is special. It is a universal covering space, which means that it is a covering space which is simply connected. The word “universal” however, means that this particular covering space also “covers” all the others.

Another example is the torus. Its universal covering space is the plane, and as we recall from The Moduli Space of Elliptic Curves, we can think of the torus as being obtained from the plane by dividing it into parallelograms using a lattice (which is also a group), and then identifying opposite edges of the parallelogram. Hence we can think of the torus as a quotient space (see Modular Arithmetic and Quotient Sets) obtained from the plane. The case of the circle and the line, which we have discussed earlier, is also very similar. Yet another example, which we have discussed in Rotations in Three Dimensions, is that of the

(which is also known in the theory of Lie groups as

), whose universal covering space is the

(which is also known as

). Similar to the above examples, we can think of

as a quotient space obtained from

by identifying antipodal points (which are “opposite” points on the sphere which can be connected by a straight line passing through the center) on the sphere. From all these examples, we see that we can think of the universal covering space as being some sort of “unfolding” of the quotient space.

A perhaps more abstract way to think of the universal covering space is as the space whose points correspond to homotopy classes (see Homotopy Theory) of paths which start at a certain fixed basepoint (but is free to end on some other point). The set of these endpoints themselves correspond to the points of the topological space which is to be covered. However, we can get to the same endpoint through different paths which are not homotopic, i.e. they cannot be deformed into each other. If we construct a topological space whose points correspond to the homotopy classes of these paths, we will obtain a simply connected space, which is the universal covering space of our topological space.

Image by User Yonatan of Wikipedia

Image by User Pappus of Wikipedia

A Concise Course in Algebraic Topology by J. P. May

Universal Covers on The Princeton Companion to Mathematics by Timothy Gowers, June Barrow-Green, and Imre Leader

Sheaves in Geometry and Logic: A First Introduction to Topos Theory by Saunders Mac Lane and Ieke Moerdijk